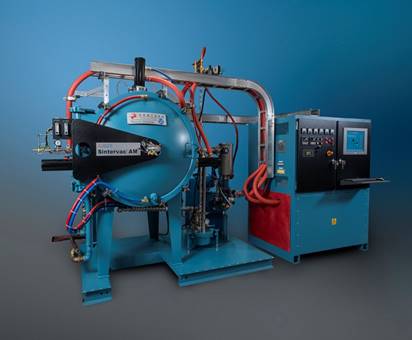 Combination Debinding and Sintering Furnaces Since the 1970’s

Since this time, Centorr has been a leader in the technology for debinding and sintering of all types of metals and ceramics. Read our article Debinding and Sintering or Metals and Ceramics – Metal Powder Report 06/2001 to learn more about the processes.

Whether it is paraffin wax, PEG, camphor, Acrawax™,  Methylcellulose, or Phenolic Resin, Centorr has a design for trapping via condensation or mechanical filtration, and thermal oxidation using incinerators where required. Centorr’s furnace designs typically include integral refractory metal or graphite retorts inside the hot zone to compartmentalize the offgassing sending it directly to the traps and vacuum pumping system, or to an exhaust tower if processed under positive pressures.

By removing the binder phase from the parts in one combined cycle (including sintering), the customer achieves a much lower overall cycle time than performing debinding in a separate step, and doesn’t risk the yield loss of fragile parts during movement of the trays from the debinding oven to the sintering furnace.

Debind and Sintering Furnaces are Used in a Variety Of Industries

For more information on CENTORR VACUUM INDUSTRIES' line of Debinding and Sintering furnaces please click on the links below: